So I had the good luck of catching this article from Salon.com: New dissolving “tampons” could protect women against HIV. If you didn’t spot this one, you owe it to yourself to take a look. I think some of the new technologies to combat the spread of HIV are beyond exciting, but what I really liked about this one was the way it approached the problem from the standpoint of how women and men in the target demographic are having sex.

A quote in the article from Cameron Ball, a bionegineering doctoral candidate, stated:

We envision a product that could dissolve, pretty much instantaneously, into a gel and then spread around the vagina during sex … We want something that dissolves quickly so that people can say, “Hey, I wasn’t planning on it, but I’m going to have sex in five minutes so I need to use this product, and I want it to be completely dissolved before that.”

Real world solutions for a very real problem – I hope you enjoy the read as much as I did!

When I first learned about text messaging campaigns a few years ago, I really couldn’t understand who would sign up for one. What was the value add? Text messages are the fun things you look forward to from friends and family, not another way for the outside world to get into your phone. I have to admit, the feeling persisted (even as I signed up for mobile appointment reminders from my dentist) until this week when I was reading the Mobile Commons paper 5 Ways Mobile is Revolutionizing Healthcare and made the amazing discovery that “the average American sends and receives 41.5 text messages per day”? A DAY! Not per week or per month, but per day. 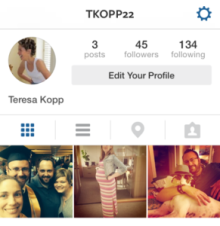 Ok, you got me – Healstagrams isn’t a real word, but Instagraming for health is most definitely real!

As you may have guessed, week four of my six-week exploration into all that is health communications was all about Instagram. I’ll admit, at the outset, I was skeptical. What could a photo site hold for health? I imagined huge barriers with signed photo consent forms, pictures of gross wounds, and images of self-promoting surgeons taking selfies in the operating room. While the first one may be true, in general the landscape is far more inspiring than I anticipated.

After quite a bit of research, I’ve compiled a top 12 of the Instagram pages I found that really did a great job promoting health. I’m now happy to hand this list on to you as a resource. Here they all are for your viewing pleasure, with…

So I’m knee deep in Twitter, looking around and having a ball thinking “I’m rocking this social networking thing” when I realize, I’m not social networking, I’m microblogging. Whoa, what the what?! It had all seemed so straight forward…or so I thought. I write a blog – that’s blogging. I talk with friends on Facebook – that’s Social Networking. I sync up with work contacts on LinkedIn – definitely Social Networking. I tweet to friends and follow industry voices – now I’m microblogging? It felt like that time you had a glass of wine and thought “I’m totally fine” and then you stood up and you were drunk. I was drunk on Social Media, or maybe I was just the town drunkard in a land called Social Media. Whatever. Either way, I’m the kind of person who needs clarity. I crave logic and order in my day-to-day life and deal…

Let’s be honest, health care has always attracted innovation. Since long before the dawn of the blood transfusion (a rather gross history in my opinion) and vaccines all the way to six-sigma catheter lists and electronic medical records – health care professionals and professional innovators have had a long and fruitful relationship. Meaning it is no surprise that social media and health have great opportunity to collaborate…and boy are they collaborating. Social impact games for health, social networking sites for health, crowd sourcingfor health, mHealth, and much more are all converging to bring about large changes in how the world gives, receives, and talks about health care.

In going through some of the resources available for starting up your own blog (including Heather Mansfield’s excellent book, Social Media for Social Good) I found myself grappling with the impression that many nonprofits are using blogging as little more than thinly veiled attempts to raise additional funds – not really considering the content they bring to the reader, much less the field. I know, this probably sounds completely jaded, but after looking around at various blogs, I really was overwhelmed by the feeling that for every well-written, thoughtfully-crafted blog produced by a nonprofit, there are two more that are simply going through the motions so that they can point you to the “Donate Now” button.

With that background, I became curious. Is this my cynical side winning out? Have I read too many “featured fundraiser” blog posts and “urgent call for donations” headlines for my own good? Is the…

So I’m left at a complete loss this week as yet another portion of the ACA is brought into question, but I’m not tongue tied for the reason that many would suspect. Since this blog is relatively young, I’ll enlighten any unfamiliar readers to the fact that I’m a strong supporter of socialized medicine personally. I don’t think ACA nailed it, but I was just thrilled that we were one step closer to reconstructing what health care means through massive reforms. My hope was (and remains) that a larger pool of insured Americans would result in stronger leverage for bringing down health care costs, better transparency on where our healthcare dollars are going, and greater equality in accessing health needs.

Sadly, this week was another hit for the third item as equality again comes into question. After many states opted not to participate in the Medicaid expansion, leaving some of their most vulnerable residents unsupported, there is now tension over when and how subsidies should be made available only for health plans established by the state or whether whether federal plans are eligible for subsidies as well. Payroll provider, ADP, provided a nice overview in their article Supreme Court Bound? Circuit Courts Split on Important ACA Provision:

The United States Court of Appeals for the District of Columbia (the D.C. Circuit) agreed with the plaintiffs and ruled subsidies are only available for coverage purchased on State Exchanges. The United States Circuit Court for the Fourth Circuit (the 4th Circuit) upheld the interpretation advanced by the IRS by deciding that subsidies are available to individuals whether they purchase coverage through a State or Federal Exchange. If this appellate court split remains, there is a high likelihood that the U.S. Supreme Court would review this matter and issue an opinion resolving conflicting decisions by the end of its next term in July 2015.

One obvious issue is that many states declined to create state-based exchanges, relying instead on the federal exchange to cover their residents.

Yet again we find that the citizens left most vulnerable to lack of health care are those that need the support the most. And I grow one step closer to applying for Swedish citizenship. My husband could always change his name to Sven…he looks like Sven.

Blogging for my health
Blog at WordPress.com.